Paul from Retain Salisbury goes above and beyond. 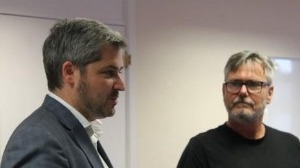 A SALISBURY-BASED carer has been recognised for going above and beyond his duties throughout lockdown.

Paul Gericke, who is a community home carer for Retain Healthcare, was celebrated for his efforts as a Retain Hero at a socially distant awards ceremony where he was presented with a nurse’s watch as a memento of his dedication.

Having only joined Retain in the early days of lockdown, in April this year, this is Paul’s first job in care. As lockdown continued, Paul worked above and beyond, taking on extra care and responsibilities.

He has turned his hand to all aspects of full-time care and support work, including home-based care and working with hospital patients and supporting their return home.

And Paul has quickly built up a reputation for going the extra mile to make every experience special.

Recently, after the lifting of lockdown, Paul took a young client out for the first time in over 15 weeks, although it was potentially high risk to take the client out, Paul ensured that the music was up and the windows were down, so the client had the full effect of being out and about.

“I’ve always believed that it’s very important to help other people and so becoming a community home carer allowed me to express that and be of service to my new community," said Paul.

“It’s rewarding to have a positive impact on people’s lives. On the day with the young carer that I was nominated for, I think I enjoyed that day just as much as the client. Lockdown has been difficult for everyone, we’ve all been affected. Some people have really had to suffer a high degree of isolation but I think that nothing blasts away the blues better than some music and fresh air. It’s great to bring a smile to someone’s face.

He added: “When I found out that I’d been named a Retain Hero I was a little shocked to begin with I thought my colleagues were playing a prank on me. I hadn’t expected anything like this to happen, but I’d be nothing without all the other wonderful people I work beside though. If I’m a hero then they’re super heroes.”

The managing director of Retain, David Trowbridge, said: “Paul has quickly proved himself to be an asset not only to the Salisbury branch, but also to the whole business. For us, it does not matter if someone has years of care experience when they join us; we look for characters and attributes like Paul – someone who truly wants to make a difference for the better and to be part of improving a customer’s life. In the six months Paul has been with us, he’s hit the ground running and has been of benefit to many parts of the company with his proactive attitude, which means that our customers are getting the best possible care.”